To get to review Medieval Times is awesome and a wonderful opportunity. I went as a child a couple of times, and once prior as an adult. My husband and daughter had never been so I was excited to get to see their reaction to it. We arrived at the castle at 6:45pm, and there was already a pretty long line. I had left over 45 minutes before that so to say Dallas has bad construction traffic is an understatement. We arrived and stood in line for about 10 minutes talking with my Mom and Dad. Then you heard them blow the trumpets and announce it was time to come in. The line to go in was pretty quick,  though it was clear from the moment you got in there they wanted to try to get you to buy photos. On the same spot you purchase any tickets from your reservation, is a sign to pay $5 to get a picture of someone in the stocks. That was right away, though I had had thought of doing that to my husband!
Then, you go through after finding out what knight you will be rooting for and you get a crown. From there, you have an opportunity to stand with the Princess Catalina and get your picture taken with her. So right there not even five minutes into the castle are two opportunities to spend money on pictures. From there, you get the opportunity to dress up and have a picture taken in a costume. We got to get Olivia's done, and it was just so cute! But the prices, it was $20 a photo! If you aren't careful you can spend upwards of $100 before you even make it into the main area!
From there, we walked in and a bar was right in front of the doors. Want a beer? How about spending $7 on a cup of Shiner...seriously. You want a cute tiara or crown? How about a princess hat? $14-$20 a piece! We saw a tube of dragons (kind of like a tube of green army guys) that I wanted to get Olivia as a stocking stuffer for Christmas. $15.95 and a third of the tube was empty. I'll wait for Toys R Us. But, Grandpa and Nana's job is to spoil the kiddo so she got quite a bit! The pictures also came out really great as well and I was so appreciative they purchased them for us. I loved all the backgrounds they had, we let Olivia choose her background and she wanted the red dragon. I really loved the white, but the princess gets what she likes! 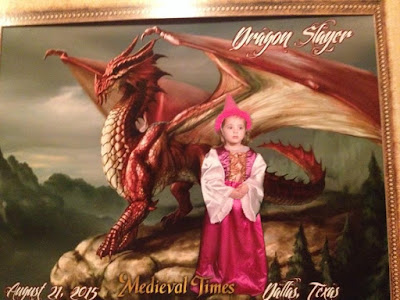 After about 15-20 minutes, it became clear that the lack of air conditioning and the hundreds and hundreds of bodies really did not mix well with an alcoholic drink. Sweat was pouring off of us as we waited, but it was still fun to show Olivia the castle's insides. I even took her up to meet the King as he sat on his throne and she was the shyest little thing. But he was really kind and a "friendly King" as he put it. We also showed her the horse stables through the windows, which she absolutely loved. One was scratching his nose on the window and others were just staring out and I love horses. I adore them I think they are the cutest things like "big dogs". When the time came in to go to our table, we figured out we were front row! The royalty package my Dad upgraded us to confirmed 2nd or 3rd row seating. Front row was even better, one employee said that was "considered VIP". Well, alright then! We sat down and being in front row you get the best spot in the house. In fact, our table was near the middle of the arena (Black and White was the actual middle so...kind of to the side). My husband and I took turns during the show holding the kid so we could eat as she didn't want to sit alone. Hard to eat with your fingers, when the kid wants to be front and center but you make it work! 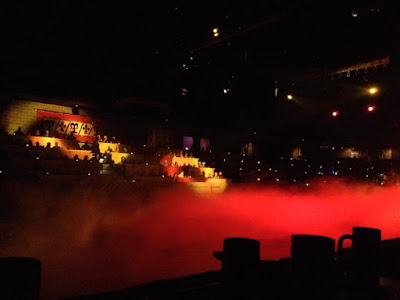 When I went to Medieval Times for the first time as a child, I sat in the Red Knight's cheering section. Last time it came back full circle as I was once again front row and in the Red court! When the show started, the smoke machines kicked in, the lights started going all colorful and I felt like I did when I first went. The food was great and they brought it out every 15-20 minutes. First, you got a choice of unsweetened iced tea or pepsi. Then you got a piece of garlic bread, and a bowl of "dragon soup". Which is tomato bisque with vegetables; then a huge roasted chicken piece like half a chicken. Then a half of a potato, an ear of corn (and props to my surf for hearing me say I couldn't corn on the cob so instead he gave me two potatoes and gave my ear of corn to my husband), The chicken tasted fantastic and normally I do NOT like getting my fingers and nails dirty when I eat, but seeing as here your right and left hands are your fork and knives, what are you going to do? Ignore the amazing food? HA! Finally for dessert an apple turnover that came out very hot, and the filling dripped on you. But you forget to eat really you're so into the show! 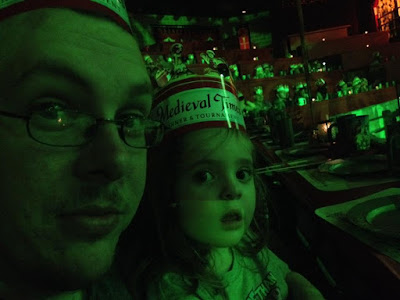 We first got to see a beautiful white horse, then a falcon entertain us. The whole show my daughter was mesmerized by the horses and kept asking if they'd be back when they disappeared. During the show, the knights would participate in a "tournament" and every time a knight won a round, he'd receive 5-6 carnations from the princess to pass out to the audience. We kept trying to get the knight to give Olivia one, and the first round he seemed to ignore us. But then he smiled and waved at her, and I thought that was sweet. Round two, he almost seemed to just skim right over us, and as he rode away he made a motion like he was thinking about her, and winked. At that point my Mom thought he had something special planned for her. Third round, again, he completely looked over her and the lady beside us gave Olivia her carnation which was sweet. 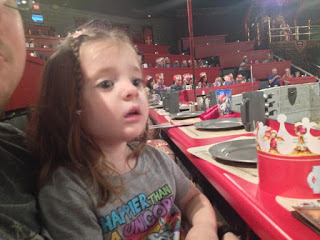 By then, Olivia's attention was turned not to the show but to the "flowers being thrown" and I was grateful the woman gave her the carnation but a bit disappointed that Olivia didn't get anything.  She soon didn't care, and went back to watching as the knights continued to joust, and fight and have fun. A couple of times when the knights dismounted their horses, the horses did NOT want to run out of the arena! It was so cute, the horses were just trotting around or running around not even caring that sparks were flying off swords and loud bangs from shields. The attention would steer off the knights and we'd spend more time watching the horses playing and trotting around like "Haha, can't catch me!". Of course, my husband's "Mystery Science Theater" style jokes during the show made it even more awesome. At one point when a horse took off and REALLY ran out of the arena he made a "peace out" joke and I couldn't stop laughing. During the tournament, our red knight was nicknamed "Mr. Shinypants" by my husband, yes, I cracked up hard. Probably funnier with alcohol in your system. Also, our speaker looked like Weird Al Yankovic. He did, totally. In fact I overheard Dad telling Mom that after my husband had said it to me. Plus, I swear the red knight looked like Kevin Sorbo, haha. 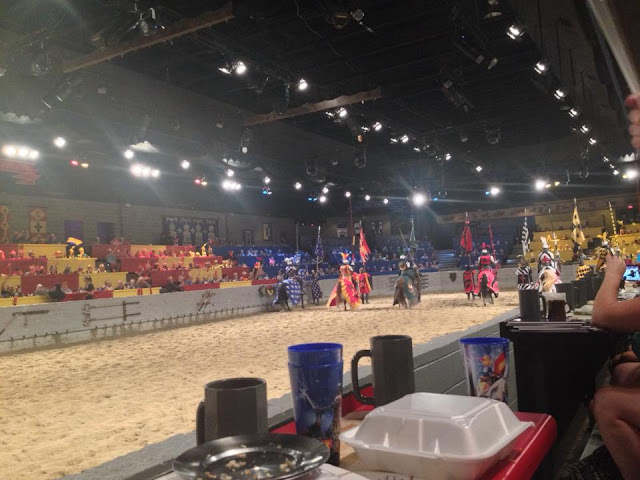 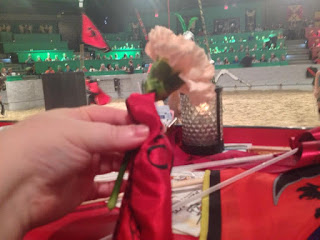 As the tournament part of the show came to a close, the knights all had a small sash with a carnation tied to it on the end of their lances. Imagine our surprise and happiness when the red knight came right over, and gave the sash to Olivia! I helped her get it off, and it was SO sweet that he bowed to her and everything!  At this point, we'd been watching the show over an hour and Olivia was getting tired and not understanding she'd won something so sweet, so I spent the remainder of the shower waiving it like a flag for her. I loved seeing the knight make little gestures to his horse as well when sitting on him and waiting to go. You can tell these knights take their position seriously and the horses are attached to the owners. It was really sweet and fun to watch.

By the end of the show, we'd cheered until our throats were scratchy, eaten wonderful food, enjoyed all the fighting and the story line and had a blast. I really hope to get to return soon, as I would love to make this a "Royal Tradition" with my daughter. A huge thank you to The Red Knight for making my daughter feel so special last night, and thank you to Medieval Times for the tickets! My parents celebrated their TWENTY-FIFTH wedding anniversary with dinner part one last night here! Thank you for helping me make their anniversary memorable!