Note: I read the Google reviews before we went to the restaurant. My review is not paid for, and I truly don't know what those people were on when they came here because I do not agree with ANY negative review I saw. I'm an honest reviewer, so get ready for the ride.

When we pulled up to Roscoe's I was very nervous. After the horrible experience we had at Lonesome Dove Bistro I was worried that another experience would occur that would completely make me want to stop blogging. After we came in I was immediately impressed. The name is "Diner" but this does not look like a diner it looks really fantastic. It's big, open, airy, they have the sports bar on one side and the diner on the other. 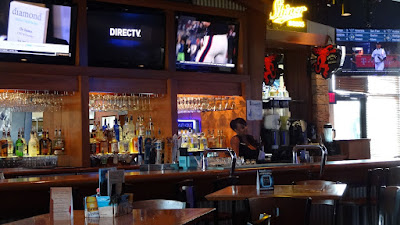 The bar area looks great with a large bar, televisions, an awesome electric jukebox that I wish I'd gotten a picture of, and a meeting area that seats I believe he said 30 or 50. Matter of fact, I'm hoping to tell the Panther Creek H.O.G. my parents are members of about this place and have them come out some time. Can you imagine fifty motorcycles all coming up the highway and pulling into this place? I love the idea, personally. The manager, Jeff came out and greeted me once we arrived and after speaking with him I was a lot more at ease. Turns out, he is best friends with the owner of the original Roscoe's Diner in NY and after moving to Grapevine, got tired of having to go back to NY for food like this. He wanted to bring this kind of food to Texas where he felt Texans were getting tired of chain restaurants. Yes, he couldn't be any more right. When the opportunity comes for us to eat out at a restaurant we are always groaning at the chain restaurants. After a while, everyone tastes the same. We were seated by the hostess and our server was Emily. 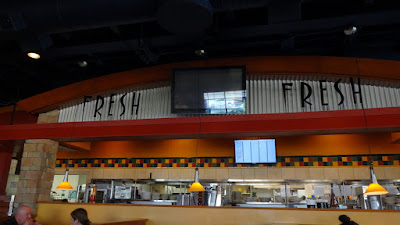 It was nice and cool the whole time, the seats sat us a little low (Jon said it felt like he was a kid, haha). They gave Olivia a couple of crayons (Crayola too, not name/generic brand that was too waxy!). It took us quite a while to figure out what to order, because the food sounded incredible. Jon said that Gordon Ramsay has always said a place with pictures on the menu is not a good place and pictures are never needed, but this place we really wanted the pictures! There are so many incredible options when it comes to their menu, and we just could not decide. 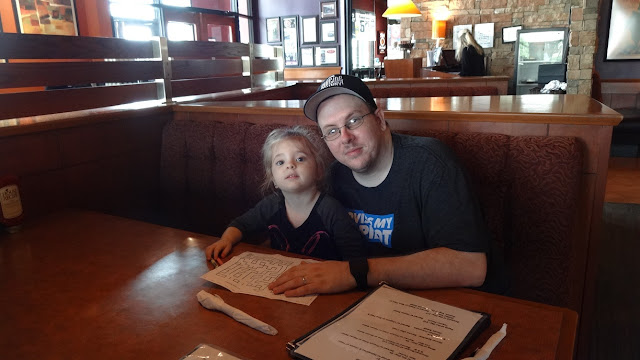 In the end our order came out like this: 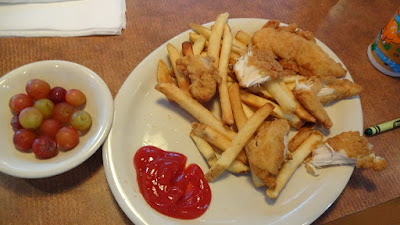 As soon as Olivia's food came out, and by the way a huge thank you to Emily for suggesting we order her food before we had decided so she could eat while we waited, I had to compliment the chicken tenders. Most places use a thick batter so when it fries, it gets crunchy, hard, and dries out the chicken. This was juicy, VERY juicy. The batter was thin and had a small amount of seasoning to it which for an almost four year old who is a picky eater was perfect. The french fries she loved (You can see in the picture as we tried to get a good shot of the food she was already diving into the ketchup with them) and since we've gotten home the majority of her food is gone. 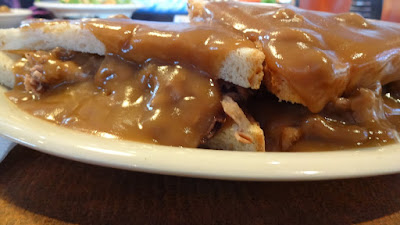 My salad came before my meal (was given the choice) and I was impressed! The salad was very fresh, was baby greens and not the typical iceberg lettuce you see in a house salad. My only slight complaint would be the cucumber slices had a bitterness/sourness to them but Jon said it was because they were larger. The cherry tomatoes were perfectly ripe though unlike most chain restaurants you get those wrinkly little things. The sandwich came shortly after the salad, and I tried the potatoes. IN-CREDIBLE. Fresh mashed potatoes there is NO instant in this house folks! You could see bits of skin still in the potatoes, I'm usually one of those people that has to dip something in something. Like bites of potatoes in gravy, nope. Even after feeling full I could NOT STOP eating the potatoes! I just kept nibbling even though I felt like I was about to pop! The roast beef was amazing, tender, tasted home made (who needs to eat at home anymore, just come to Roscoe's!) and the bread with the gravy was amazing. I could go on and on but now to the best entree of the night. 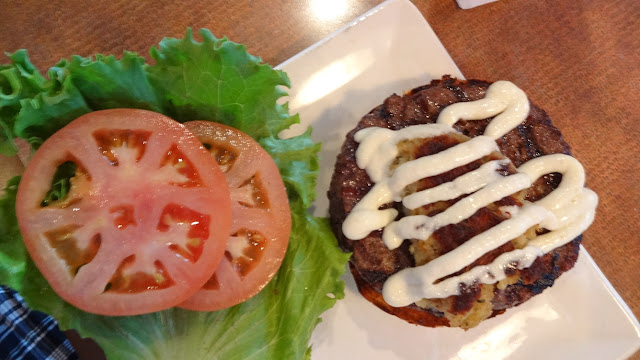 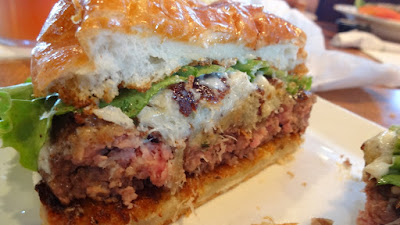 Jon's burger, oh man, this burger. He kept talking about it while he ate it begging me to take a bite and I was trying to eat my own food there was so much of it (FYI, the portions here are perfect to really get full from. If not, you have lunch tomorrow.) but he said you could taste crab in every bite with the hamburger (which was perfectly cooked to medium by the way). He didn't taste the horseradish though, said it tasted like a seasoned mayo yet when I did get a bite of it I totally could taste the horseradish so I think it's just a person's taste. I'm not a crab cake person at all, yet one bite of this burger and I was wishing I'd gotten the burger instead of the roast beef! Oh it was incredible the flavors were just so bold. This is not food you expect at all for a place called a Diner, you really don't! The entire time I sat there eating all I could think of is "By the time I'm done with this review it'll be ten pages of compliments!" and guess what, I was right.

Then...dessert. I have to be honest I completely COMPLETELY forgot to get pictures of the desserts and for that Jeff I sincerely apologize. But...come on those things were taunting us to eat them. We were given three slices of Roscoe's homemade colossal creamy cheesecake with strawberry topping, and one slice of their Skyscraper Chocolate Bavarian Cheese Cake. To the person on the google reviews who stated that their strawberry topping was nothing more than a gelatin canned topping only IHOP would serve, you're an idiot and a liar. I'd say more, but this is a family blog and I don't use profanity in writing.

You want perfect cheesecake? You know you do, if you live in DFW or even visiting and going near Grapevine Mills mall you HAVE to come into Roscoe's JUST for their cheesecake. Jeff informed us they are priced LOWER than Cheesecake Factory, and theirs is made fresh on site at the restaurant every day. Cheesecake Factory is frozen! So why would you eat frozen cheesecake that is more expensive and miss the quality of excellent cheesecake right outside the mall? Yeah, this is something that even now I want more of. The topping is so fresh, as soon as Jeff brought us the boxes I opened the strawberry one up and picked a slice of strawberry out. Fresh, real strawberries within a great topping. You CAN NOT find this anywhere else, I'm serious. I'm a cheesecake-aholic I try to eat it anywhere I can. I'm the one who makes two cheesecakes every Thanksgiving and Christmas for our family get togethers (yes, instant of a box but still) so that tells you how much I love it. Again, I could go on and on and on about their food but how about you just go find out for yourself?

As we left, we were getting Olivia situated in her car seat when a woman pulled up beside us. She asked us how it was and I told her that I did not expect the food that we received, it surpassed any initial opinion I may have had going in and I told her no matter what meal she got, she HAD to get dessert. We are lucky to have had this opportunity and I again would like to thank Jeff for the great experience. We will be going back as often as we can to try their breakfast and try more of their other meals. Oh and Jeff, we hope you like the picture Olivia drew for you!

Out of five stars, I give Roscoe's NY Diner & Sports bar in Grapevine: TEN STARS!!!!!