Trick or Treating: Door to Door or Trunk? (Mommy Monday) 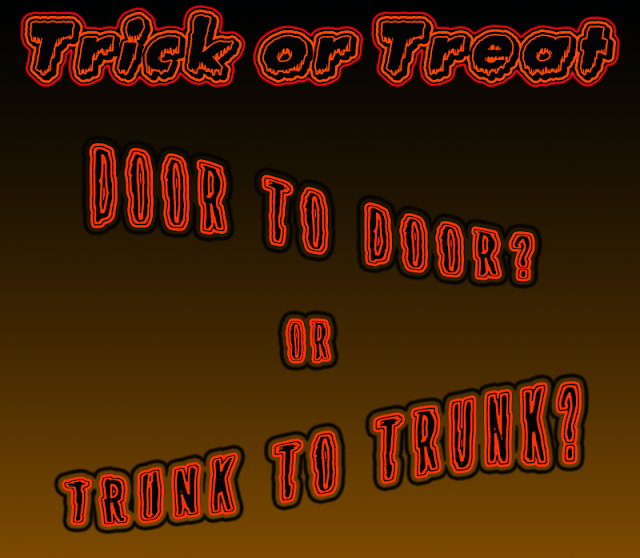 In the last few years, the words "Trunk or Treat" have become more and more common for you to take your children on Halloween. Instead of going door to door, you now drive your costumed children to a location where people open their trunks and pass out candy. Sure people decorate the trunks and make them all fantastic but the excitement and thrill of Trick or Treating was going door to door. You'd see neighbors you never knew existed for that one time of the year, you'd remember which houses gave you that awesome chocolate mini bar and which ones passed out popcorn balls. So what is it that makes Trunk or Treat so special now?

As a child, I did door to door trick or treating. It was awesome, I'd dress up every year in some costume that was rarely store bought. One year I was a purple genie that won me 1st place in a costume contest held at Brookshire's (My prize? A microscope...every young girl's dream haha). Another year I was a dead 50's girl in a poodle skirt, a collared top and my Mom decorated me in bloody make up. My last year I went "Trick or Treating" I was actually in my 20's and my now husband and I dressed up our dog as a lion and went to a more upscale part of Plano, Texas called "Deerfield". These mansion sized houses would go all out and you'd have a blast. My husband played the role of a "zombie" that night, and I still have amazing memories. Sadly, Deerfield is now overrun by selfish, self-absorbed, greedy pre-teens and teenagers who would rather step on a young child than leave a piece of candy so we can't do that again. BUT, I'm going off track...


My daughter was a year and two days old for her first Halloween, and we only lasted about twenty minutes going door to door. We had to carry her, she was already exhausted by night fall, and yet once she realized going to the door got her goodies she loved it! The next year was a lot better, but a bit different. A neighborhood in Arlington, Texas is specifically known for door to door trick or treating. The whole neighborhood of 4-5 streets was jam packed with people from all over the city coming to enjoy collecting candy. The best part was, my husband decided to wear a horse mask like you'd see on the internet (before it became popular to wear the horse mask and it's later mimicked copies). He was stopped in the middle of the street just to take random pictures with strangers! But do you get this same feeling with a Trunk or Treat?

My daughter's school is doing a trunk or treat next weekend, and I'm contemplating taking my daughter but I'm not sure. Besides the fact we may have plans that day, I just don't know if I want her to get that easy candy. I'm worried she'll also go "Hey, I go to this trunk/car and get candy!" and then if someone offers it and I'm not around (which if I'm not around and she's alone outside we got issues!) she'll go right up expecting candy again! I just feel like a Trunk or Treat is just not the same as traditional Trick or Treating and I wish we could get back to that wholesome fun.

Elizabeth is a work at home Mother of a sweet and beautiful daughter. She is a wife of seven years and a blogger for some time now. When she isn't spending time with her "Livvybug" she is looking for new review opportunities and writing or singing along to classic rock and pop music!
Childrens Mommy Monday