Every year at Christmas time, we love to go looking at Christmas lights. Out in Plano there's a few neighborhoods called "Deerfield" that are large, almost mansion style homes. They hire people to go all out on their houses making every single house sparkle and shine. But, I live in Arlington. To go out at night with a four year old and brave the traffic of Deerfield (45 minutes from home) and then drive back can be a nightmare. Prairie Lights is located in Grand Prairie off of Joe Pool Lake, and it was AMAZING!! I cannot wait for you all to read this review! 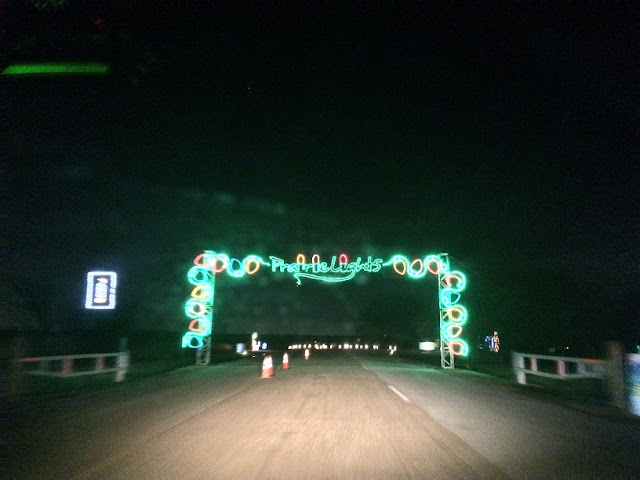 Arriving at the attraction was actually very easy. The hardest part was modifying our GPS direction because of an accident along the way. When we got there, I made a comment that it didn't seem that busy so I thought going on a Monday would be simple and easy to do. Soon as we started going along, I was like a kid in a candy store. My mouth was smiling wide the entire time and my daughter kept pointing out all the awesome things! 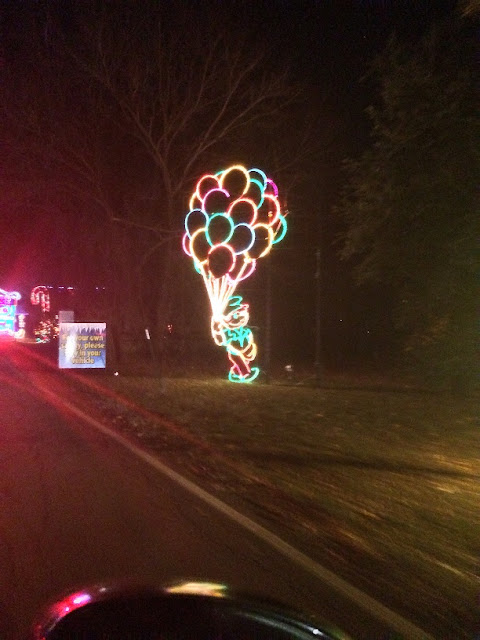 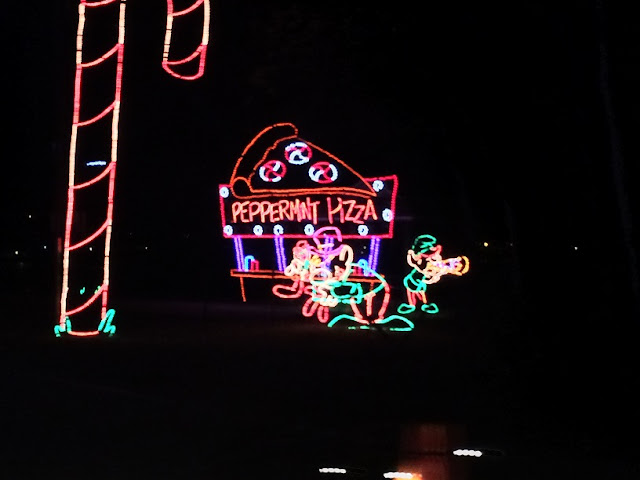 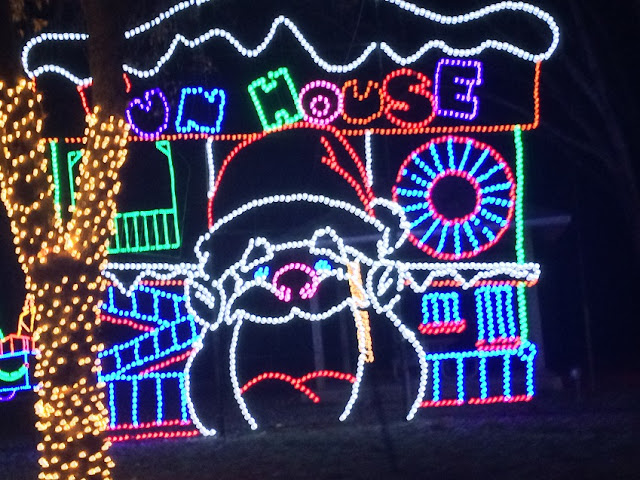 The coolest part, was they had sections that had themes such as a garden that had flowers, butterflies and so on, a prehistoric area with dinosaurs, volcanos, and stuff. Then we came across this awesome "12 Days of Christmas" display. I only wish my timelapse option on my iPhone would slow it down, and I didn't know about Instagram's app until later on.

There were only a couple of things that I wished could've been a bit better. You are to drive without your lights on during this and that's great but sometimes there weren't lights signaling the sides of the path you're driving. I kept flicking my lights on and off just to make sure I wasn't about to drive into the lake and I'm sure that frustrated the person in front of us. The other thing, is you really could not see the lake at all even when you saw the water in the night's reflection! I thought they should've bought some of those giant blow up, light up ornaments and tossed them into the lake! Wouldn't it have been awesome to just drive by or walk by and see floating ornaments in the water? Just a thought I had as I traveled along the path.

We got to Santa's Village and through the fence you could see their walk-through area. There were also two rides: Flying elephants and a carousel. The elephants were fun for them, Olivia loved flying around with Daddy and best part was, the rides were free! We could've gone as many times as we wanted but...within 30 minutes of getting to the village it's like the human flood gates opened up. With as cool as it was there was NO way we were going to wait in line.

On another note: The carousel was the fastest one I had ever been on...ever. I was standing the whole time while Olivia ride this horse, and I was so dizzy the entire time! She loved it though kept talking about how fast it was and how many times she could see her Daddy. 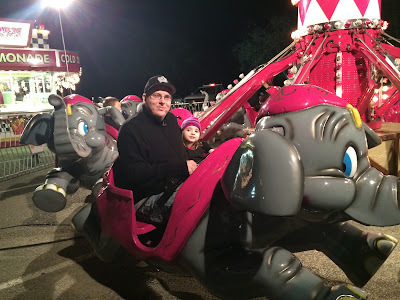 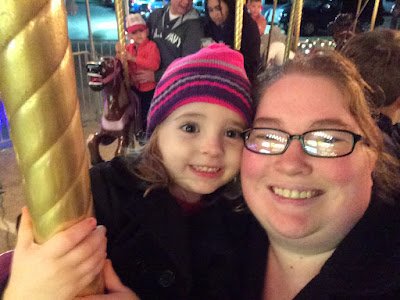 After we rode a couple of rides, we walked through their Christmas Lights path and it was really pretty as well. Many of the displays were bright and large such as cookies for their candy area, and they had a "royal" feast area as well. It took us about 15 minutes to slowly walk through and I really got sentimental and into the "Christmas spirit" by the time we walked out of there. We wanted a drink but the only place that took cash was within the tent that held Santa Claus and the laser light show. They also wanted a bit more money than they should for food and drink so we just held out. The best part, was the laser light show! It lasted about 10 minutes, and it was incredible. They had bright lights, multiple songs, and they even used foam snow in the middle of it. Olivia had a blast with the laser show but one thing she kept saying was how hot it was in there. They had a couple of stand heaters in the room and yeah without any air flow, it got pretty warm. But it was totally worth it and I hope to see the company's Pink Floyd show they said they put on. Below is a clip of the show they did!


Heading out was also awesome, I had heard about the light tunnel and I couldn't wait to get to it. We first drove through penguins and saw light ice blocks with fish in them and things like that. We also passed by the 12 Days of Christmas scene again which was great because the first time around I didn't get to really enjoy it. I was too busy watching the people in front of me play stop and go with their lights so this time I got to drive by and see each number, and you could even hear they had music playing outside playing the song. We then came up to the light tunnel which we have now nicknamed "Spaceball - 1: They've gone to plaid!"

It was an incredible night and something I hope we get to do again! Thank you to Beverly with Prairie Lights for not only our tickets but for the two winners who also get to go! Merry Christmas one and all and make sure to go by Prairie Lights if you're in DFW!

Elizabeth is a work at home Mother of a sweet and beautiful daughter. She is a wife of seven years and a blogger for some time now. When she isn't spending time with her "Livvybug" she is looking for new review opportunities and writing or singing along to classic rock and pop music!
Attractions Christmas Lovers DFW Local Reviews