The Christmas Season is always one of the most "wonderful times of the year"...according to the great Christmas song. With beautiful attractions all over Dallas/Ft. Worth, you can't stay as grumpy as the grinch or as snobby as Scrooge. The Trains at North Park is a cute exhibit that benefits children through the Ronald McDonald House of Dallas and we were lucky enough to be able to go and review it! 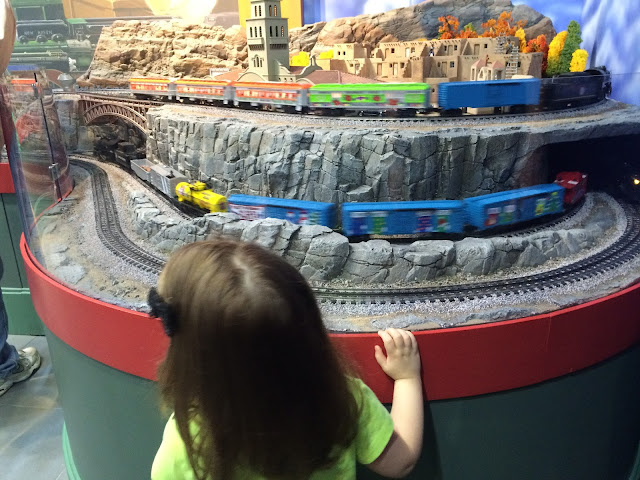 Within the exhibit are several different areas of trains. We loved each part as they whipped and zoomed by. Each train was long, some were running parallel to others and you would find the most amazing surprises. My daughter's favorite was seeing a train go by just to find Lightning McQueen and Mater the Tow Truck on a car. The train cars are hand painted and show a lot of dedication and time to the exhibit. One thing we loved was seeing how many family names were listed, showing donations or could've been families that had been helped by the Ronald McDonald house. 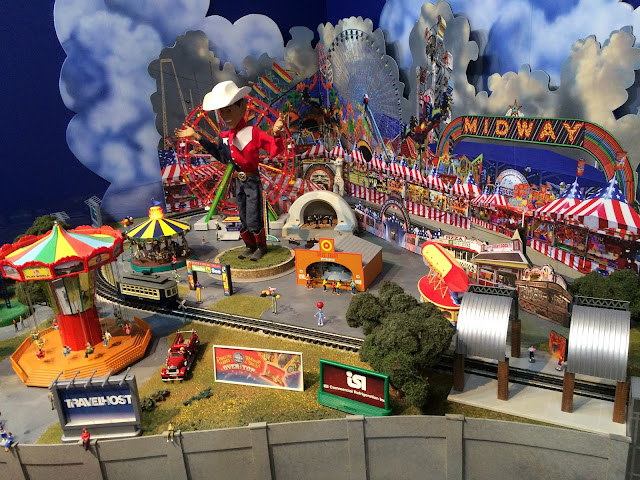 If you have never been to Texas, then you've never seen our State Fair! The annual ritual of the state is a wonderful place to visit with food, rides, games, livestock, crafts, and more. The Trains at North Park took the time to create a space just for the fair and I loved it. I loved their vision of "Big Tex" (and he looked just as disproportionate as a doll as he does as a giant man, haha), and the trains zipping by through their version of the State Fair made me wish there was a track within the real one through Fair Park. 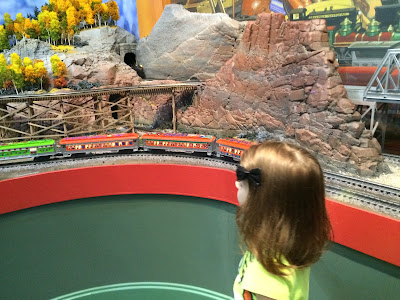 There were also hills and cities just like in Texas that the trains would pass along, under, through, and above. When you thought you'd see all the trains another one would go zipping by! The only complaint I would have is people did not want to allow children to see most of the time. The adults were reaching in messing with the trains, standing in the way of children trying to see and that made my husband and I kind of irritated. Any exhibit at Christmas time is for the children, so unless you're showing your child something or you're standing there waiting for your child to finish looking at something, don't be a jerk, haha. Don't ruin it for the rest of the kids! My daughter didn't really care though, I think it was just a personal irk of mine. 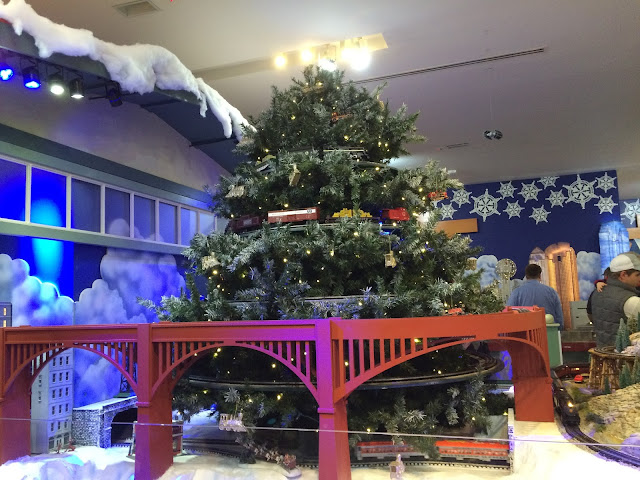 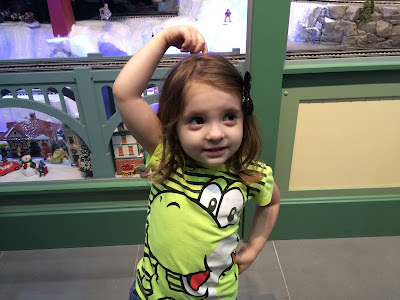 This was my absolute favorite part of the entire Train exhibit. A beautiful Christmas tree right in the center of the room with trains flowing all around it. I believe there were four of them, just rotating around and around. The attention to detail at this exhibit by the way was absolutely awesome. But only adults or children on their parents' shoulders could've seen. Small cars were seen on $7.00 per adult and $3.00 per child, you can visit the Trains at North Park through January 3rd! I would suggest going Monday-Thursday though. We decided to stop in on a Saturday and it was a bit of a frightening nightmare in parking. That is no fault of the mall or the exhibit it was just people who did not want to pay attention to their fellow man in a several thousand pound piece of machinery.
neighborhood roads. Little people were seen camping in mountains or walking around on the streets. You could see cute little areas where they really took the time to decide what to put where and it was a fantastic sight! With pricing low at

Thank you to the Trains at North Park for such a magical experience! Merry Christmas!

Elizabeth is a work at home Mother of a sweet and beautiful daughter. She is a wife of seven years and a blogger for some time now. When she isn't spending time with her "Livvybug" she is looking for new review opportunities and writing or singing along to classic rock and pop music!
Attractions Christmas Lovers DFW Local Reviews