When I was a teenager I would say "Sure let's go get coffee!" but I would always get something non-coffee. At Starbucks instead of getting a "peppermint mocha" I'd get a "peppermint hot chocolate". Instead of "Javachip Frappuccino" I'd get a "Chocolate Chip Frappuccino" (Double blended always!). But as I've gotten older (Turning 32 on July 13) I have become a coffee liker. Not lover, liker. Well, that was until I got to try Crazy Cups Coffee. This month, I get to review "Chocolate Raspberry Truffle" and for this to be my first flavor, I have been raving about it already via Social Media. 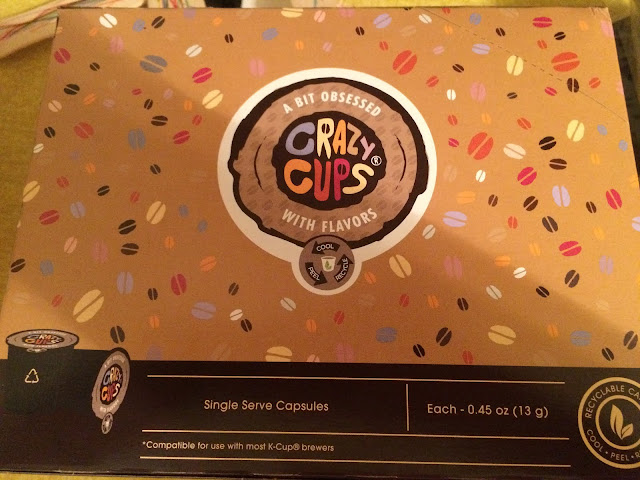 First off, the K-Cups received from Crazy Cups feel heavier than for example Maxwell House. Both are Medium Roast, but these are heavier. Usually for me, a chocolate coffee smells and tastes burnt. You can't really taste chocolate just a bitter flavor and I'm having to down about half a cup of sugar in it to get it down. Also, most chocolate flavored coffees for some reason give me migraines and I think it's because they use artificial sweetners sometimes. Not the case with Crazy Cups! When I brewed my first cup, I just stopped moving in the kitchen as it poured into the white coffee mug. Oh the smell, it smelled like an incredible chocolate raspberry flavor in the air. I could actually smell the raspberry!

I always use cream and sugar in my coffee, so I did a small amount of sugar (we use organic cane sugar as it doesn't upset my husband's ulcer) and used a bit of the heavy whipping cream as I was out of half & half. My first sip had me going "Mmmm". Again, I could taste the raspberry. Normally fruit flavored coffees I don't taste the fruit! I just taste the "chocolate" flavor and nothing more! But yes, the raspberry not only was strong in this but it was just right. Didn't taste artificial at all! The chocolate flavor was a bit burned to me but that could just be more of a "dark chocolate" or even a "baker's chocolate" style. Most people are not like me, they don't want to taste chocolate in their coffee they aren't into sweets like that.

Usually when I get a cup of coffee, I will sip on it, sip on it, then forget about it and realize two hours later I only drank a third of it. I got through my first cup of Crazy Cups "Chocolate Raspberry Truffle" in less than 10 minutes. I just could not put the cup down! This morning I was out of the cream so I used regular milk and I will admit it was not as mind-blowing. So using half & half or heavy cream definitely brings out the flavors more. You can get 22 Cups for $15.90 on their website (the link is here) and if you REALLY want to get "crazy", I just saw they have CAKE BOSS Raspberry Truffle coffee. Okay that's definitely one I have to go for some time!

Elizabeth is a work at home Mother of a sweet and beautiful daughter. She is a wife of seven years and a blogger for some time now. When she isn't spending time with her "Livvybug" she is looking for new review opportunities and writing or singing along to classic rock and pop music!
Food and Meals Reviews