Getting subscription boxes is really awesome especially when it comes to out of the country items. Japan Funbox has different sized subscription boxes to meet your needs. A "mini" (which is the size we received), an "Original" which has over 15 items, and then the "Family" which can have up to 30 items. Sadly, I was unable to get images of many of the items because they arrived melted and after a re-freeze they did not come come out good. So I am using images from Super Cute Kawaii who also received the same box. We received a box that included: 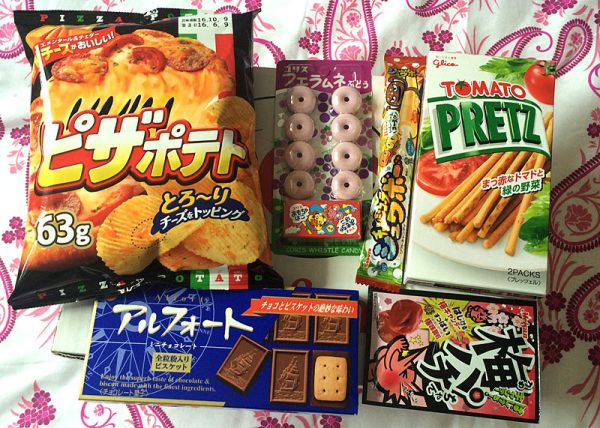 The Whistling Candy was the favorite thing that came in the box for our family. They are a somewhat softer candy that tastes like grape, and they do whistle! It became so much fun for us to put between our lips and suck in. I was happy the candy was not hard at all it made it easier to trust it wouldn't hurt my daughter's teeth. We also got a small toy in ours, it was a small dinosaur so it's great that is like a double treat.

These I didn't try I cannot wrap my head around tomato tasting crispy sticks. But my daughter LOVED them. Which made me happy, she doesn't touch anything vegetable flavored. Yet she was eating every pack she could get her hands on...until I made the mistake of telling her it was tomato. Yep, that put a stop to that! They are small, crispy, and smell divine!

These are definitely a "you hate them or love them" kind of pizza chip. I didn't care for them, and my husband did. My daughter wouldn't try them of course but my husband said they carried a better pizza flavor than Pringles or anything else he had tried.

Okay, I take it back THIS was our favorite thing. It was like pop rocks! But honestly? They were stronger they popped more. They were also crunchier when you tried to chew them while they popped. The flavor was fantastic they were a plum flavored which you don't normally get. The only negative is the salt pieces were too large and if you chewed at the wrong time, all you got was salt. But it was awesome seeing my daughter try things like this for the first time.

The Alfort Chocolate and the Green Tea Kit Kats came in completely melted and unable to be photographed. I tried to throw them in the freezer the moment I received them but they only re-froze with the topping (chocolate or green tea covering) in the bottom of the wrappers. I notified Japan Funbox of this and told them they should consider the insulation pieces that Amazon has begun shipping their boxes with in the Summer for perishable items.

Compared to other subscription boxes I've had, this was awesome in terms of the candy but I was very disappointed in the way the items melted. That's really not a fault of Japan Funbox that's more when items are being mailed in the Summer to Texas. I do believe that although they are shipping directly from Japan, they should be adding something inside the boxes to ensure the items do not melt. This keeps me from wanting to do a subscription as Texas is hot from June to October. There's no point in receiving boxes that are going to just have melted items for 5 months of the year. But if you live in the North, overseas, or are fine with that the prices are very good for the amount you receive and the variety.

Elizabeth is a work at home Mother of a sweet and beautiful daughter. She is a wife of seven years and a blogger for some time now. When she isn't spending time with her "Livvybug" she is looking for new review opportunities and writing or singing along to classic rock and pop music!
Food and Meals Monthly Subscription Boxes Reviews