Heading to Medieval Times in Dallas, Texas is always an exciting time. From talking about the jousting and the exciting games to the horses and falcon, you know you're going for an amazing experience. Being invited to the media event was an awesome opportunity something that we will never forget. 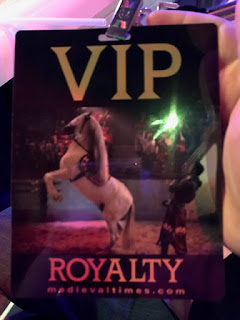 Upon arriving to the castle (which should've only taken an hour from where we live but thank you D/FW traffic it took two!) we ran inside with five minutes to spare. We were surprised with not only front row seats, but VIP lanyards and towels on our seats for us to cheer on our knight, the Black and White knight!  Inside the castle before the show, you will find many opportunities to take pictures such as "in the stocks", or you can dress up in beautiful princess or knight attire and have a great background added on. You will also find amazing things such as swords, statues, and even clothing at the gift shops to purchase before and after the event. There was no time for us to really get to look at everything as everyone had already seated, and we had to run inside into the arena to be able to know for sure we'd make it in. Thank goodness our seats were on the same side of the castle as the front! 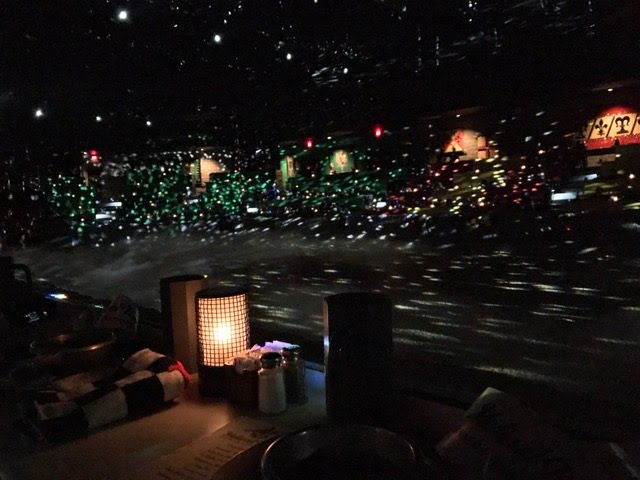 The lighting at the beginning of the show really was amazing, and made the whole room look as though it was being lit up by tons of fireflies. It was a great beginning for us to arrive to after such an ordeal trying to get there. Our server was also amazing, and he took wonderful care of us although we had come in after he'd done his speech. Unlike before, this time wasn't too cold in the arena which was great, and we had the best seats in the house, front row center! 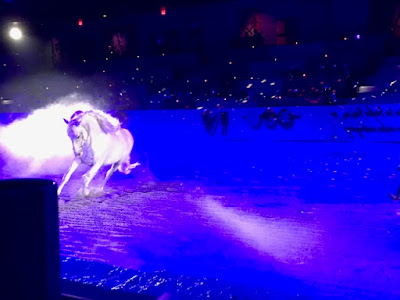 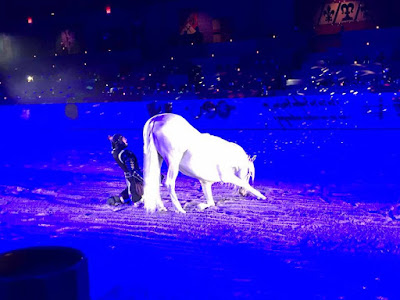 We were able to see a show of the King's beautiful creatures, and this horse loved to perform. Absolutely gorgeous isn't he? Trotting around his white hair was beautiful against the blue lighting. During his performance, we were treated to a very tasty bowl of Dragon Soup (Tomato Bisque) which I will admit it was released on Fox 4's website one day and I fully intend on making it at home. A delightful bowl of soup that tastes incredible especially when you dip in your garlic bread. Also during our feasting, an amazing falcon flew around above our heads. I didn't feel comfortable taking any pictures or video only because last thing I wanted to do was give the falcon something to land on, haha. But she was beautiful, and our daughter's mouth was wide open the whole time. I think one thing I love so much about Medieval Times is although you are stepping into this enchanted time portal that allows you to see incredible animals and knights once more. It's no longer just on screen in a film you can see this live and in action as you devour an amazing feast. The last pose from our sweet white horse tells you just how hard the animals and knights work together to bring you such joy while you are there. 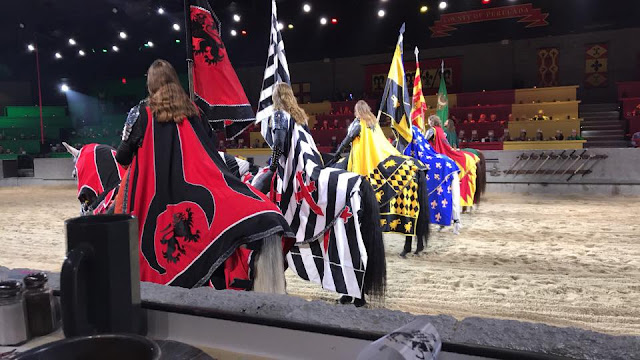 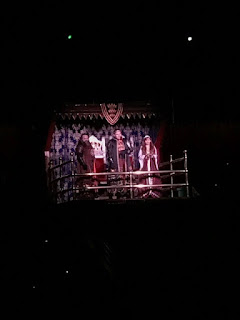 The King, Princess and a gentleman who I cannot remember exactly what he was (A Harold maybe?) announced the games, and we were so very excited. Our knight came out and the show wasn't completely full in terms of audience like usual so he made sure to get us cheering. Of course, cheering while trying to enjoy wonderful food is difficult but we definitely did the best we could. We cheered on the Black & White Knight, and after every round of playing the winning knights would receive flowers from the princess to give out to women in their section. The first round, our knight won and began throwing flowers. He came to the end, and looked at our daughter and said "I have something for you soon." and rode off for the next round.


After a few more rounds, the Knight came back and would continue to throw flowers, and kept telling our daughter "I have something very special for you!" At one point, she began crying feeling left out but she then calmed down by all the excitement! From relay races to jousting, the loud bangs of lances bursting in front of us it was so incredible to see! But the best part (at least for my daughter) came when the knights were able to choose the "Queen of the Tournament". Last time we went, our daughter was queen by the Red Knight, this time, it was the Black and White Knight!


From there, it was time to battle for the winner of the tournament and we cheered in excitement. Unfortunately, our knight was out by the first round but we knew to cheer on the Yellow and Red Knights as well! 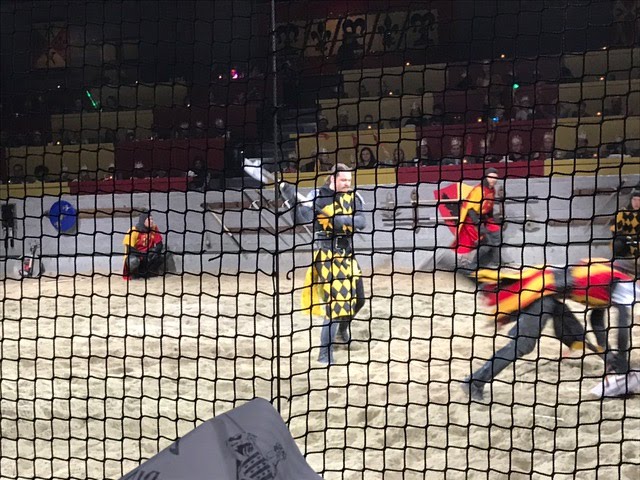 For safety a net comes down during the jousting as well as the battling to ensure nothing comes out and strikes the audience. This includes wood from the lances, sparks from the armor or weaponry (which is all real!) but it really did not take away from the show. By this point in the show, everyone was done eating and so we were really into cheering and calling out in excitement for a winner. In fact, I ended up cheering so much my throat was feeling weird by the end! The Blue Knight won, and then he had to battle the bad guy. I got so into the show and cheering on the knights with my daughter I completely forgot to do pictures or video of the final battle but I must admit...the Dallas castle NEVER loses! 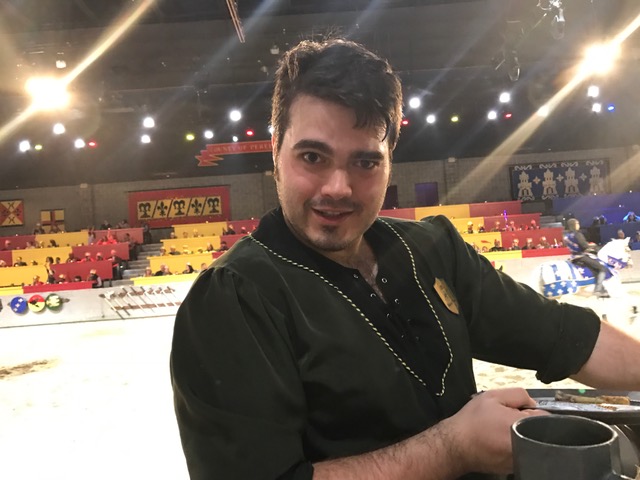 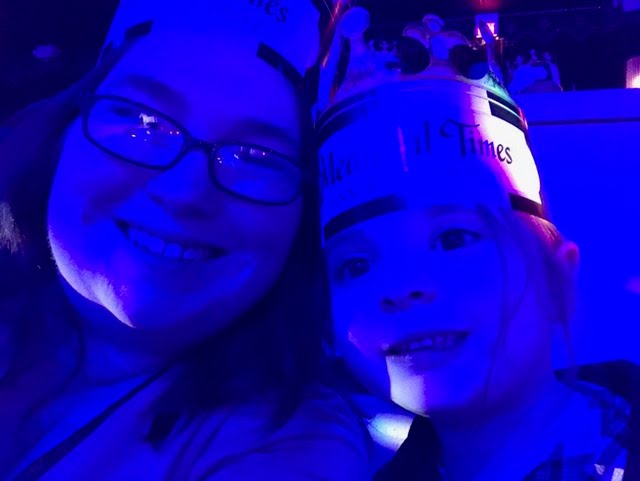 Medieval Times is one of the most family fun attractions you can spend time at, enjoying great food and entertainment for two hours that make you for months after still feel joy. You can get there early (if traffic allows of course) to enjoy time shopping, looking at the torture chamber or seeing the horses in their stalls through windows. Even after on late nights, if they still do it there's even dance parties! So hurry to Medieval Times today!

Elizabeth is a wife to her wonderful husband, a work at home mother to her beautiful little girl and a blogger for some time now. When she isn't spending time with her "Livvybug", or laughing with her husband, she is looking for new review opportunities and writing or singing along to classic rock and pop music!
Attractions Reviews